During the pandemic, many of us began to explore interesting locations nearby, including in neighboring countries. If you visited Kyrgyzstan many times already and think you know everything about it, our new article is for you. Lada Khasanova, a guide with twenty years of professional experience, national tourism trainer, civic activist, and a true patriot, shares attractions in the city of Osh and other reasons to choose Kyrgyzstan as your destination.
by Victoria Miroshnichenko

Why does Kyrgyzstan attract tourists?
Kyrgyzstan offers visa-free entry for the nationals of 64 countries alongside a safe travel environment.
The Kyrgyz welcome tourists and the country is completely safe for solo travelers. Our people will always help in a difficult situation, invite a traveler to visit their homes, and provide them with food and shelter.
Kyrgyzstan is a mountainous country.
Mountains occupy 92% of its territory. Kyrgyzstan has parts of two mountain ranges, the Pamir and the Tien Shan, and three world-famous ‘seven-thousanders’ – the peaks of Khan Tengri (7,010 m), Lenin (7,134 m), and Pobeda (7,439 m).

There is a variety of interesting trails for any level of training.

Kyrgyzstan is known for its pristine nature and varied climate.

In just a few hours, you can travel from a semidesert with temperatures around +35–40°C to permafrost where there is still snow in July and night temperatures fall to -5°C. The country’s astounding landscapes are a true find for photo and video artists.

The nomadic culture.
In addition, the Kyrgyz have preserved the nomadic culture and traditions for thousands of years and tourists do not need to visit museums or performances to see them – they just need to leave the city and head for the mountains.

“What I like about my profession is that I do not only uncover my country for others but make travelers fall in love with this land, my city, and our attractions. I love to share information and knowledge about the region.

“I always tell my young guides at workshops that guides are the crème de la crème of the tourism sector: a guide is the only employee of a tourism business that communicates directly with travelers and explains and interprets heritage to them.”

The Epic of Manas: The Memory of the Kyrgyz People

Manas is everything for the Kyrgyz – they have Manas Avenue, Manas Airport, the Manas military base, and, of course, the largest epic in human history. The printed version of the Kyrgyz epic is twenty times larger than Homer’s Iliad and Odyssey and five times larger than the Indian Mahabharata. It takes half a year to chant Manas to the komuz (a string instrument) — pretty long, indeed! This was found out in the 1930s when Stalin ordered that the epic be recorded. All the akyn performers were gathered to make the recordings. They worked ten hours a day and the entire process took six months. Interestingly, there were six groups of akyns working and all the six recordings turned out to be identical.

Manas is a trance epic. A performer enters into a special state of mind before reciting the epic. The Altai people and the Far North nomads have similar epics. It is astonishing how nomads tell the legends that trace back thousands of years. Living human memory is a special instrument. While we hope to store information on artificial media such as flash or hard drives, the art of the akyns is a living human memory that is thousands of times more effective and capacious than any artificial device.

In Kyrgyzstan, the manasci (readers of Manas) traditions are more widespread in the north – Bishkek and Talas. Talas has Manas Ordo, a large historical and ethnographic center, and Bishkek plans to open the Manasci Center.

Lada Khasanova believes that a true guide should always pursue creative growth. This is why she is taking a course offered by UNESCO and EU partnership project Silk Roads Heritage Corridors in Afghanistan, Central Asia and Iran: International Dimension of the European Year of Cultural Heritage. Upon its completion, Lada will become one of the professionals working along the Silk Roads and promoting the conservation of the region’s history and rich culture. But even today, Lada is doing her best so that travelers leave with warm memories of Kyrgyzstan. 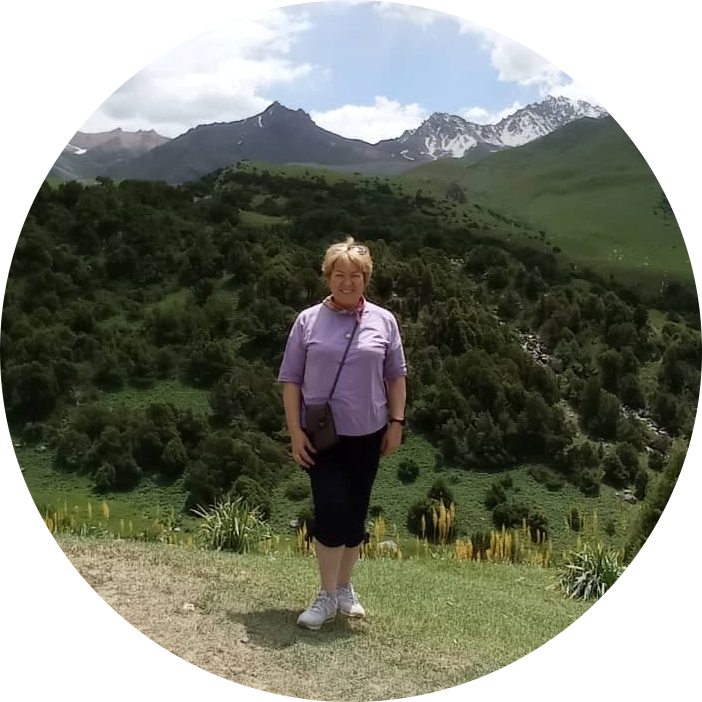 “This course taught me how to use innovative techniques in my work and tourists appreciate that – not only they notice changes in my approach but, more importantly, they come again and again.”

Osh, a Transit Point on the Silk Road

Today, Osh is known as the southern capital of Kyrgyzstan. It is the second-largest city after Bishkek and one of the most ancient cities in the country and Central Asia. Osh was a transit point on the Silk Road, which connected the West and the East. This great route witnessed the rise and fall of entire civilizations but, for three millennia, Osh was the heart of busy and vibrant life that never stopped.

The city began with small Bronze Age settlements at the western and eastern foothills and on the southern slope of the Sulayman Too Mountain. The artifacts found there were radiocarbon dated and revealed to be more than three thousand years old. Although there was no cohesive city yet, just separate sites, it is obvious that settled life has never stopped in Osh since the 13th or 14th century.

“There are many sights in Kyrgyzstan that I love, but my favorite one is the Sulayman Too Mountain in Osh. It is a UNESCO World Heritage site. The mountain keeps many secrets and puzzles, which I’ve been studying for fifteen years. My second favorite place is the village of Kozhekelen in the mountains 100 km from Osh, which is known not only for its amazing nature but also the ancient pre-Muslim culture.”
The oldest written accounts that mention the city are those by the great Chinese traveler Zhang Qian, who was the first one to describe the Silk Road. He wrote about Ershi, the capital of Dayuan, defining it as a “city at the revered mountain.” Some artifacts, including the largest sanctuary dating back to the Dayuan times and associated with the cult of the horse, suggest that when Zhang Qian visited this land, the capital of Dayuan was Ershi, not far from today’s Osh.
The UNESCO World Heritage Site Silk Roads: the Routes Network of Chang'an–Tianshan Corridor is a 5,000 km section of the vast network of trade routes. Three ancient sites – Krasnaya Rechka (Nevaket), Ak-Beshim (Suyab) and Burana (Balasagun) on the World Heritage List – are located in Kyrgyzstan.
Due to its advantageous location in the southeastern part of the Fergana Valley, at the northern foot of the Kichi-Alay Range, at an altitude of 1,000 meters above sea level, Osh was part of many states. These included the Samanid, Karakhanid and Timurid states, the Khanate of Kokand, the Russian Empire, the Soviet Union, and finally the independent Kyrgyz Republic.

If you are tight on time when visiting Osh, make sure that you visit the following:
Sulayman Too Mountain
This should be visited with a guide and never for entertainment only. It is a sanctuary and should be treated as such.
Central Bazaar
Just walk around the market and then stop at the center and close your eyes. Listen to the sounds of an eastern bazaar and then continue your walk, having entered another world.
Bazaar cafes
Don’t hurry and just observe the people, their emotions, moods, and behavior –you’re sure to be captivated.
National cuisine
Samsykhanas (establishments which cook the samsa pastry), mantykhanas (serving the manti dumplings), and ashkhanas (cafes) offer delicious Osh-specific cuisine.
Illustrated by Roman Zakharov

This material has been prepared as part of Silk Roads Heritage Corridors in Afghanistan, Central Asia and Iran: International Dimension of the European Year of Cultural Heritage, a project implemented by UNESCO with financial support from the European Union.

The contents of this material are the responsibility of the author and do not reflect the views of the European Union.